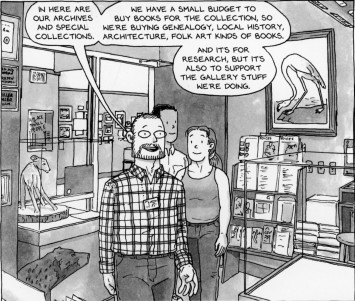 Christopher Baldwin is a cartoonist and graphic novelist. He was a regular contributor to MAD magazine for more than a decade, and in 2018 won the Toonie award for Cartoonist of the Year. He was one of the first webcartoonists, and has regularly been posting comics online since 1996, self-publishing over 20 comic collections and graphic novels.

"I find Glens Falls to be a remarkable town, not only in its resources, but also in the devotion and enthusiasm people here have for the arts. I wanted to capture both. I didn't want to create just a list of facts, I wanted a history told by the people who were excited to be a part of them. An oral history—albeit transcribed, edited, fact-checked, and drawn."
Christopher Baldwin